How Safe is a Bike Tour of Glasgow

GBT Guide: How Safe is a Bike Tour of Glasgow

At Glasgow Bike Tours, potential customers regularly ask us  how safe a bike tour in Glasgow really is and how much time is spent on the city’s busy roads.

Fortunately, we are able to honestly reply that cycling as part of our guided Glasgow tours is extremely safe…but why? Please read on to find out or get in touch with any specific questions.

What makes a Guided Bike Tour of Glasgow so safe?

Of the 9-mile route, that makes up the 3-hour Glasgow City Sightseeing Bike Tour, around half a mile is spent cycling on roads with other traffic. Most of the route is either on cycle lanes, beside rivers on dedicated cycle ways, along canal tow paths, or through some of Glasgow’s endless selection of public parks (not actually endless… 97, if you must know). All this means that quite often cycling around Glasgow is more like being in the countryside than a city.

The reason that the bike tour route is like this is simple: in selecting the route, Keith (the founder of Glasgow Bike Tours) used the same principle he has followed for some 20 years of cycling and commuting around Glasgow and that is to “avoid traffic wherever possible”. So, whether it was cycling to the local pub… (for a soft drink, obviously) or commuting to the Sheriff Court, Keith always devised a cycling route that avoided as much traffic as possible was always chosen over one that followed roads — even if that meant taking 5 or 10 minutes longer. 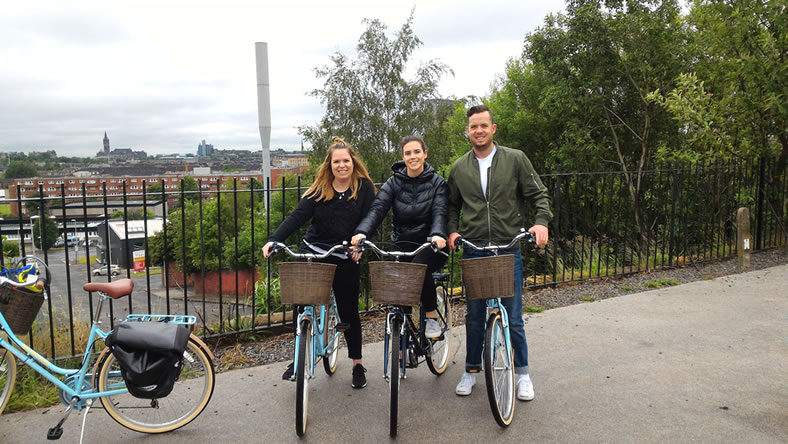 Do I need to be fit to cycle on a Glasgow bike tour?

How fast we cycle on our tours and how fit guests need to be to take part in our bike tours is something that some people worry about before booking. This worry is totally understandable; perhaps they’re on holiday with someone who is a cycling enthusiast and has decided they want to see the city by bike. The worry is usually that the bike tour pace and difficulty is designed for avid cyclists and not mere mortals. But FEAR NOT, this couldn’t be further from the truth! The tours have been designed with non-cycling tourists in mind and go at a very gentle pace because we want everyone to enjoy seeing the best of Glasgow, without any worries that they will not be able to complete the tour or keep up. In fact, even our full-day Glasgow bike tour is suitable for mere mortals!

How fast do we Cycle on a Bike Tour of Glasgow?

The quick answer to this is “not very!”, but that isn’t very helpful when trying to decide whether to do a bike tour or not as “not very fast” is clearly subjective.
However, to be more helpful, it is worth remembering that the tour is about 9 miles long and takes roughly 3 hours to complete. During the tour, we have regular stops (approx every 10-15 minutes) to admire and talk about Glasgow’s fantastic sights, which means we are only cycling for between 1.5 – 2 hours. This in turn means we are cycling at around 5 miles per hour, which isn’t much quicker than walking pace, known to be about 3.5 miles per hour. Due to the relaxed pace, we have yet to have any sort of accident… other than a direct hit by a seagull with a good aim. 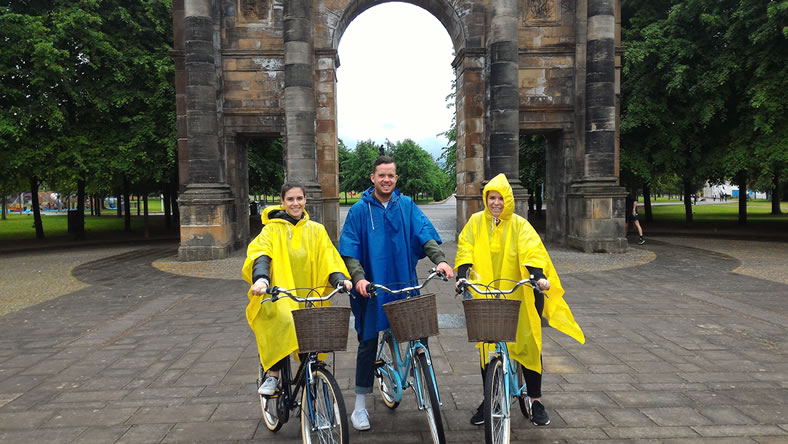 Will the Weather Affect my Bike Tour

Despite its reputation for rain, Glasgow has surprisingly little rain during the summer months. Even if it does rain, the rain is generally a short-lived shower and it is just as likely to be sunny 15 or 20 minutes later. Billy Connolly (a famous Glasgow comedian) said “if you don’t like the weather in Scotland, just wait 15 minutes”. Obviously, it makes sense to be prepared for any bad weather, so if you are coming to Glasgow or Scotland, it is a good idea to bring a packable waterproof, just in case, as Glasgow and Scotland’s beautiful scenery is best seen from outdoors.
Don’t worry about your tour being cancelled at the first sign of clouds; all our guides are used to the outdoors, so we will run tours in most weather — unless it would be dangerous to do so.
If you have any doubt about the difficultly and safety of our bike tours, please check out our 5-star reviews on tripadvisor or get in touch for more information.